SMA Consulting Ltd., together with our partner on the project, Associated Engineering and our client, City of Edmonton – Drainage Services, has won the prestigious Canadian Consulting Engineering Schreyer Award for technical excellence and innovation as well as an Award of Excellence for their work on the WESS stage W12 drainage project.

The Schreyer Award is the highest distinction given by the Association of Consulting Engineering Companies-Canada. First awarded in 1981, the award is named after former Governor General Edward Schreyer and is awarded annually to the design team with the most technically innovative project.

The awards celebrate SMA’s work in providing sophisticated decision support and project controls for the design, planning and construction of the complicated $44 million, 1135-m W12 syphon tunnel; Associated Engineering’s design; and Drainage Services’ leadership on the project and its vision of reducing sewer overflow into the North Saskatchewan River. W12 runs under the North Saskatchewan River in Edmonton, carrying 2 billion litres of sanitary overflow to the Gold Bar Waste Water Treatment Plant.

SMA is an Edmonton-based consulting engineering firm committed to bringing innovation to project delivery. Its key employees are University of Alberta PhD and MSc graduates trained in research and development who have successfully built a reputation for applying innovative methods and tools to the design and construction of infrastructure projects. 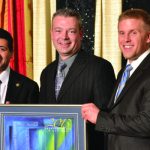 Consulting Engineers of Alberta Awards of Excellence and MeritAwards 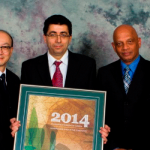